For those who know me in real life you know that my dad passed away unexpectedly sometime in the night of February 20th-early morning of February 21st. He went to sleep after being out with friends, and never woke up. We didn’t have an autopsy done, but assume he passed away from a heart attack, or an aneurysm.

The last month has been very hard. I have been dealing with stress, sadness, and grief for a while with a husband with a terminal cancer diagnosis, but this grief is different than what I had previously been living with. This grief feels like a winter coat worn on a warm spring day. It is so heavy. It comes on out of the blue, fiercely,and full of emotion. It leaves fatigue, that can’t be slept away. There is no warning for when it is coming. You just learn to ride it out, hoping it won’t last long, or embarrass you again. I have cried at the end of the bar when out with friends, at the grocery store while shopping, and just today when driving to the post office for no apparent reason. 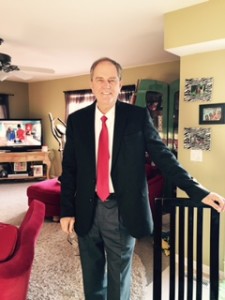 Maybe it is the disbelief. Disbelief that he is gone. I thought my dad would live to be 100 years old. He was the healthiest person I knew. He literally had never been sick. Never been in the hospital. When he started having indigestion around February 1st, he thought it was just indigestion. He was having pain in his stomach after eating, and finally went in to the dr telling him he thought it is was gall bladder trouble. He didn’t think to tell him that he was having shortness of breath, and that the pain in his stomach was moving around to his back. The dr did an ultrasound of his stomach, we got the results after he died that his gallbladder was fine. He simply had no frame of reference for what he was feeling, because he had never been ill.

Maybe it is anger that he didn’t see a Dr earlier, or go to the ER despite absolutely everyone suggesting it for the entire three weeks before he died. My dad was famous for listening to you, seeming to agree with you, and then doing what he wanted to do anyway. Absolutely everyone including my sister and I begged him to go to the ER, or to the Dr earlier than when he finally went.

It could be the dreams that started 5 days after he passed where he was talking to me, and I told him he must be at his final resting place. Or the dream I had between the 20th-21st of March which would have been exactly a month since he died where he told me that he had died at 1am. All the dreams I have had with him in them have been just the two of us talking. We did a lot of talking when he was alive. He was a talker for sure, and they seem very real.

It could be all of those things that are causing the weight of this grief, but I know that it isn’t these reasons. I just cannot get past the fact that I will never see my dad alive again. I will never talk to him, laugh with him, watch him dance around by himself in my kitchen, or ride with him driving 55 in a 70 mile an hour zone. I will never again hear him say ” Annie, it’s your dad” when I pick up the phone. As if I didn’t know who it was before I answered.

I simply cannot stand the thought that i will never see my dads face again in this life.