Has it really been a year and a half today? A year and a half since he left us? I have wondered the last couple of days why I have been so down. I thought maybe it was just the endless adulting, or withdrawls from giving up donuts yet again.

Nope, it’s the year and a half marker..

I rarely review my past blog posts, I lived these words. It was painful enough the first time. I don’t recall if I ever posted about the conversation Mike and I had regarding me dating after he was gone. It was a Saturday, about 10 days before he left me. We were home alone. We were laying in the hospital bed, I was holding onto him tightly. He said he wanted to talk to me about something since we were alone.

He proceeded to tell me that he wanted me to date and find love again after he was gone. I know how hard this was for him to tell me. He never even liked to hear about anyone I had dated before him. Unlike me, who wanted to know every detail of every woman he had ever dated! I remember me telling him that I hadn’t thought about dating, as I was focused on keeping him alive.

He said something to the effect that I was going to have a long life ahead of me, and he didn’t want me to live it alone. I remember looking at him, and holding him and balling so hard I could barely breathe. I said to him “I’m sure I will date again, but I will just be marking time until we are together again.”

We both cried so hard at that point that he was hoarse later. 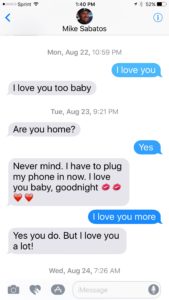 The only nights we ever spent apart were when he was in the hospital, and most of the time i slept in the chair beside his bed. I am so thankful that he knew how much I loved him, and that he knew that I loved him more, and that there wasn’t anything I wouldn’t do for him.

I have learned that I don’t want to live my life alone, and that I am a partner person. I have also learned that there is nothing to be ashamed of in this, and that the judgey mcjudges are the ones who go to bed each night in the loving arms of their partners.

The best have been the ones who accepted me talking openly about Mike. The worst are the baby faced players who will never experience a loving and fulfilling relationship. I feel sad for them.

All of it has been a learning experience for this 51 year old woman who had never dated.