The last week of Mikes life I had to be strong. I had to. I was absolutely terrified of what was happening. I remember a week before Mike died, and I was pushing him on a walker into the bathroom. He passed out, and slid off of the walker into the floor. I started screaming. I thought he was dead. He woke up in the floor, and said “Baby, why are you screaming, you are scaring me.” I said “I thought you had died, you are in the floor.” He had no idea what happened, as I literally lifted his body off of the floor, and onto the toilet.

This happened again later that day, when Mikes aunt & uncle and his sister were trying to help him into the bathroom.

We think the tumor was pressing on his aorta, and when he was moved into certain positions it would cause him to pass out. Where was the hospice company that was making $6500 a month to assist in his end of life care? That is a good question, and I wish I had an answer for you. They were largely uninvolved in Mikes care. They were too busy, the nurses over booked, and not equipped to handle Mikes complex needs. It was all left to me. I relied on advice from friends, help from my sister who had owned a medical equipment company, and google.

I finally got over my pride, and reached out to a friend for help. She was a god send. She is a nurse, and came over every night that last week. She helped us to switch the mattresses on Mikes bed to a pressurized mattress that would change the pressure on the bed, and help prevent sores. We purchased this mattress privately, because the hospice company made no suggestions beyond me manually moving Mike myself to keep him in different positions. Our friend showed me different ways to position Mikes pillows, and this helped a lot.

When we tried to move Mike to change the mattress, he passed out again. The initial recommendation was to just leave things the way they were. For those who know me, you know that isn’t an answer I would ever accept. We actually moved him on the mattress onto the floor, put the new mattress on the bed, and used the sheets under his body to move his body back onto the bed. 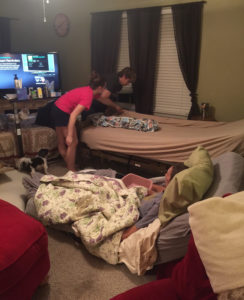 I called the hospice company, and they told me that Mike shouldn’t be getting out of bed anymore. Wow! That was helpful.

This changed things yet again.

He knew he was dying. We all knew he was dying. We had one night where it was just the two of us, and we talked about how sad he was, and how sad the situation was. He wrote about it in the journal he started keeping the last two months of his life, which I read after he was gone. He told me that he didn’t want to spend whatever time he had left crying. He said no more sadness. He actually said those words to me. Consequently, the last week of his life I would be walking around with tears rolling down my face uncontrollably, while acting normal. As normal as you can act with tears rolling down your cheeks. I was losing my best friend, my lover, my everything.

He was losing his life. I honored his wishes as best I could of no more sadness. Since he has been gone, the rules have not applied. The feels demand to be felt. They are messy, and come out at will. I hardly recognize myself. I am holding grudges, pissed off, and angry.

I reserve most of my anger at the hospice company that let me down, and the people in Mikes life that let him down. This anger is motivating me to get out of bed everyday, keeping me going, sustaining me.

I don’t have to deal with it today.