Mike left us at 3:04 am on Monday, October 24th 2016. He spent the last week of his life reaching out to friends, family, and people that he loved. He specifically asked to see several people, wanting to make sure he got to see them before he passed away. He forgave many slights, and showed grace and compassion to those he loved right up until the very end. He told me the sunday before he died that he felt like he was dying. When he was laying in bed he felt like he could get up and do anything, but when he tried he was just too weak. 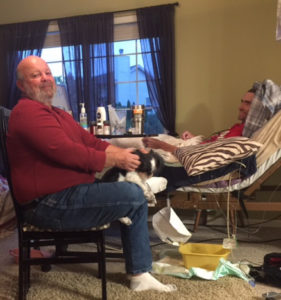 On Tuesday night at around 3am he asked me to hold him. He expressed to me some very intimate thoughts, and told me that he felt like he would pass over the weekend. He wanted his son, and his family around him. I told him at that time that God would decide, but inside I knew that Mike had fought and held on for so long that he was really in control of it, and as it turns out he was.

He slipped into a coma on Friday night while his son was playing the guitar, and my daughter laid beside him Friday night across 3 chairs all night long until 7am holding his hand, while I slept on the couch, and his son slept on an air mattress in the floor. He woke up and asked her what she was still doing there, and she told him she was just keeping him company, and he said ” go on to bed.” As always, taking care of other people.

He had asked me Tuesday night to talk to him the whole time, and to not leave him alone, and we didn’t. Someone held his hand for 3 days and 3 nights. I am so grateful we as a family were able to be here with him, and we did exactly as he wished. He was with us the whole time, responding to us right up until the end. I have always loved his sense of humor, and he was cracking jokes right up through Saturday! 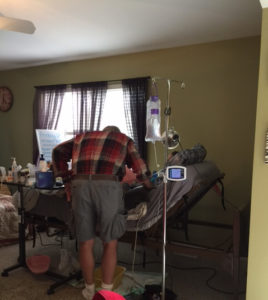 As his breath got more labored Sunday night, we all stood around his bed deep into the night and talked to him. His son texted that he had made it home to West Virginia ok, and Mike took his final breath 2 minutes later.

He was with us right up until the end, and it affirmed to me that we are more aware of things as we get closer to death, than what the experts say.

Mike was a manly man. He hunted, drove too fast, raced dirt bikes, could hit the hell out of a golf ball, he expressed his feelings, and he cried openly. He was tough. Nothing could break him, and when he needed to be he was firm. He always had a kindness about him. Over the last 2 weeks, I have seen manly men cry openly at his bedside, as he held their hand in comfort.

There are many ways that I have been changed by loving this man. He recognized my gifts of love, compassion, empathy, fidelity, and trust. He let me be me, and he appreciated it all. For so much of my life I have been alone emotionally. Having loved this man, and being loved by him I will never be alone again.